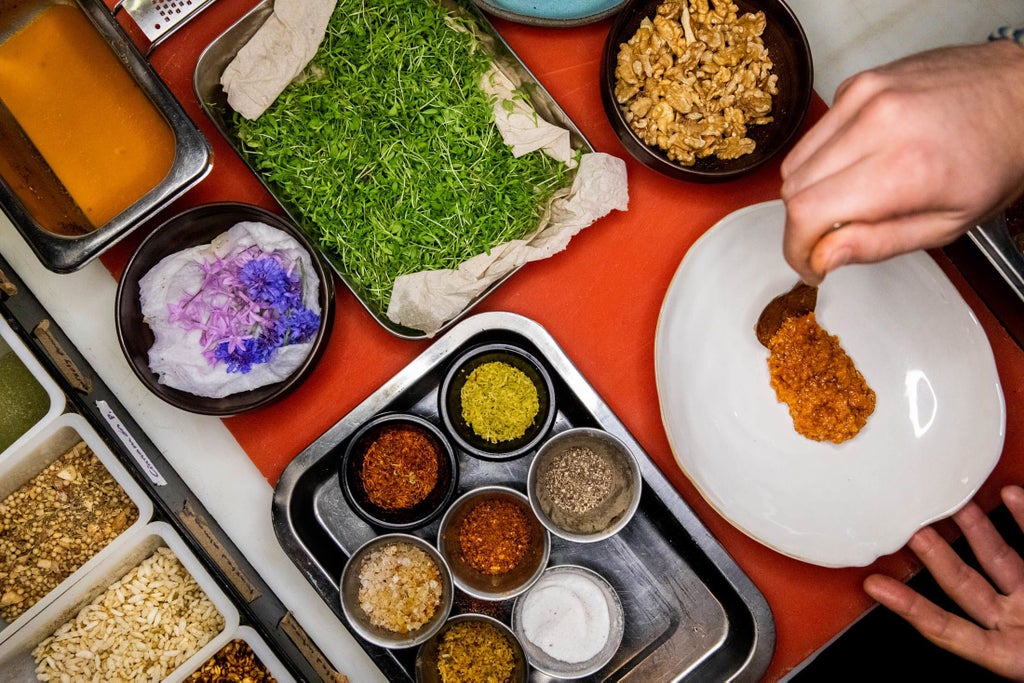 Last summer, when a deadly explosion ripped through Beirut’s port, chef and restaurateur Riad Aboulteif’s barbecue joint was destroyed. No one was injured.

His restaurant Meats and Bread, in the trendy Gemmayzeh neighbourhood less a kilometre from the blast site, suffered around £65,000 worth of damage. It was one of many businesses devastated by the 4 August explosion, which killed over 200 people and wrought more than £3.4bn worth of economic destruction in a country already reeling from the worst financial crisis in its history.

No one was injured at Meats and Bread because no one was there. Aboulteif had closed the restaurant’s doors three months earlier as the soaring cost of imports triggered by an unprecedented currency crisis rendered his American-inspired menu of burgers, steaks and smoked meats unsustainable.

Quality rib-eye costs Aboulteif £23 per kilogram to import. Two years ago, before the financial crisis, that meant he paid around 48,000 Lebanese pounds. Today, with the currency collapsed, that same £23 kilo would cost him upward of 600,000 pounds. Dwindling foreign currency reserves have unofficially rendered the official pegged rate of 1,507 Lebanese pounds to the dollar defunct, with traders buying dollars at black market rates to finance imports amid plummeting purchasing power.

The blast, which shattered the restaurant’s windows, collapsed the ceiling, and destroyed its equipment, was just “salt on the wound”, Aboulteif says. The majority of the repairs were covered by local initiative Khaddit Beirut, which targets affected small and medium businesses, particularly those in the dining and hospitality sector (Aboulteif paid the rest himself, with “zero funds from the government”).

With the venue rebuilt but its old menu financially untenable, Aboulteif decided on a 180-degree turn. In June, he reopened as Ammoula, offering a menu of experimental Lebanese cuisine prepared with local ingredients.

Aboulteif describes Ammoula’s fare as his own interpretation of Lebanese food: “We don’t want to be in competition with anyone’s grandmother.”

Soaring food prices have become an issue in many parts of the world. Lebanon, which relies heavily on imports, is one of the region’s most vulnerable countries. Food prices shot up 400 per cent in December, according to government data, and more than half of the nation’s population has plunged into poverty since the economic crisis commenced in August 2019 and was compounded by the Covid-19 pandemic and the port explosion.

When it opened, Ammoula offered a dish featuring imported guanciale (cured pork jowl). Within a week, Aboulteif decided to replace it with local pork that’s matured in a dry ager. Since then, he’s been sourcing everything from local producers and has rented his own “very small farm” in the Mount Lebanon region southeast of Beirut to produce chicken, goats, quail and some herbs and cucumbers. Such key materials as fertiliser for the plants and medicine for the animals are still imported, subject to ever-increasing price hikes and shortages. He’s had to adjust prices at least twice since opening because the Lebanese pound has depreciated.

Even as all-local ingredients and wines have helped cushion Ammoula’s prices in the face of skyrocketing inflation, there’s no way around the ever-worsening electricity crisis triggered by a shortage of imported fuel. Lebanon is suffering its most severe power shortfall in decades, and most places receive only two hours of state electricity a day.

Though the Lebanese have weathered patchy electricity for years – supplemented by subscriptions to private generators – the fuel scarcity has led many of the generators to shut down for hours each day. Restaurateurs that aim to keep their lights on and fridges running around the clock must pay for a backup generator. Aboulteif is now saddled with three electricity bills: one from the government and two from private generator companies. The June bill from the two generator providers totaled 14 million Lebanese pounds.

So far, Ammoula, which Aboulteif describes as a “work in progress”, isn’t consistently busy or profitable. He just aims to break even, relying on his more profitable Ferdinand gastropub on the other side of town to make ends meet. He says he felt he had “no option” but to change course after the blast.

“When your back is up against the wall, you will fight,” he says, although he worries that business will slow after the summer’s high season in August. “That’s the only way we know how to fight, through our food. We’re fighting the circumstances we’re living in, through our food.”

The old sign for Meats and Bread still hangs outside, by the newer one for Ammoula, and Aboulteif says he doesn’t intend to take it down. Although the switch to the Lebanese concept was driven more by necessity than national pride, he’s glad to showcase the country’s bounty, with its Mediterranean climate, mountains, and varying terroir: “You can probably find the best goat cheese in the entire galaxy in Lebanon.”

3 bons considerandos no tempo de articular as críticas a…