Camping dinner ideas from a family on the road 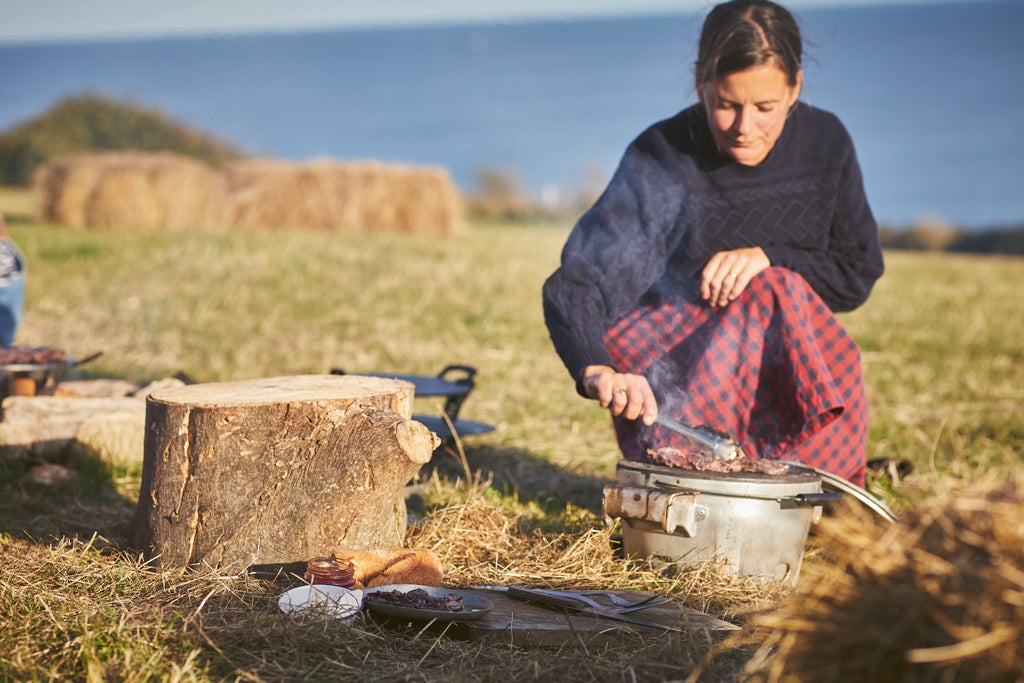 As we face another summer where overseas travel isn’t particularly easy, many of us will be exploring closer to home.

Chefs Claire Thomson and Matt Williamson are ahead of the curve; long before Covid put a stranglehold on travelling abroad, the duo were gallivanting around the country with their three daughters in a VW camper van – and whipping up delicious meals on the way.

Williamson acknowledges there’s a “misconception that everything kind of needs to come out of a jar or out of a packet when you’re camping”. He admits “there’s a place” for easy, quick camping meals, such as instant noodles or Thomson’s dreaded baked beans, but that’s not the kind of food they eat on holiday – and it’s not the meals you’ll find in their latest cookbook, Camper Van Cooking.

For Thomson, this is actually the “easiest cookbook” she’s written (previous publications include Home Cookery Year and New Kitchen Basics). “All the other cookbooks are a bit more elaborate, because you’re at home and you’ve got all your ingredients,” she explains. “You’ve got four, five burners on your oven… Whereas this is one pot, it’s primal cookery, how to make food really easily with fire, or over a little gas stove.”

As a Kiwi, Williamson spent his childhood camping and grew up on fresh, delicious holiday food. “My dad’s a butcher and a lot of his friends were quite into food, and we’d usually go to areas with a bit of fishing,” he reminisces. “Dinners were great: usually cooked over fire and barbecue.”

Thomson didn’t have the same upbringing, admitting she “wasn’t a camper – I only started camping when we got together”. However, she swiftly fell in love with it – particularly with their three children in tow. If you “go check into a hotel, it’s just a bit stifling for kids”, she says. “It’s much better to have that roaming about, free run existence of camping”.

That’s not to say she hasn’t experienced her fair share of hiccups. “I managed to leave all our shoes in a box last year and it rained – like deluged with rain – and we had wet shoes for the rest of the holiday,” she says, with palpable regret.

But for both, all the potential pitfalls of camping (Williamson admits it can be “awful” when it rains), are completely forgotten come dinnertime. “Pretty much the first thing we think about going camping, is what we’re going to eat,” says Williamson.

Thomson adds: “I love the food angle of cooking outside. I love the evenings and the conviviality of meeting new people. It’s always that nice energy around teatime, when you’re bumping into people on the campsite and the kids make new friends – I like that freedom.”

For Thomson, the key to a good campsite meal is coming prepared with store cupboard staples, and looking to what’s on offer in the local area. “By the sea, you might buy some fresh fish, or inland you might head to the farm shops, or in Cornwall all the little roadside vegetable stalls they have with honesty boxes,” she says. “I’ll cook anything, but we’ll always look to where we are to what we’re cooking.”

Getting everything together for a camping holiday might seem daunting: there’s so much you need to think about and remember. Williamson says: “Our backgrounds are in restaurants, and my approach to being in a restaurant is, if you’ve got everything ready, life’s really easy – and cooking is really easy and fun. With camping, everything takes twice as long, so having everything to hand just makes it so much more relaxing.”

“In restaurants, it’s called ‘mise en place’,” Thomson chimes in, “when you have all your stuff in place, [ready] to go. And that is camping.”

As much as he prizes organisation, Williamson says: “At the same time, if something is missing, you just roll with it. Because who wants to go running off to try find some ingredients? Having a degree of flexibility, along with being organised, is just as important.”

She admits the holidays they do – in a luxurious VW camper van – are “fairly aspirational”, but these recipes suit any type of camping, catering to all levels of equipment and skills. “There’s a romance to camping,” Thomson adds with a longing sigh – no doubt imagining the family’s next adventure.

Disney’s Jungle Cruise movie with The Rock: Release date and how to watch

Rihanna’s bringing out a fragrance: What should you think about when buying a new perfume?