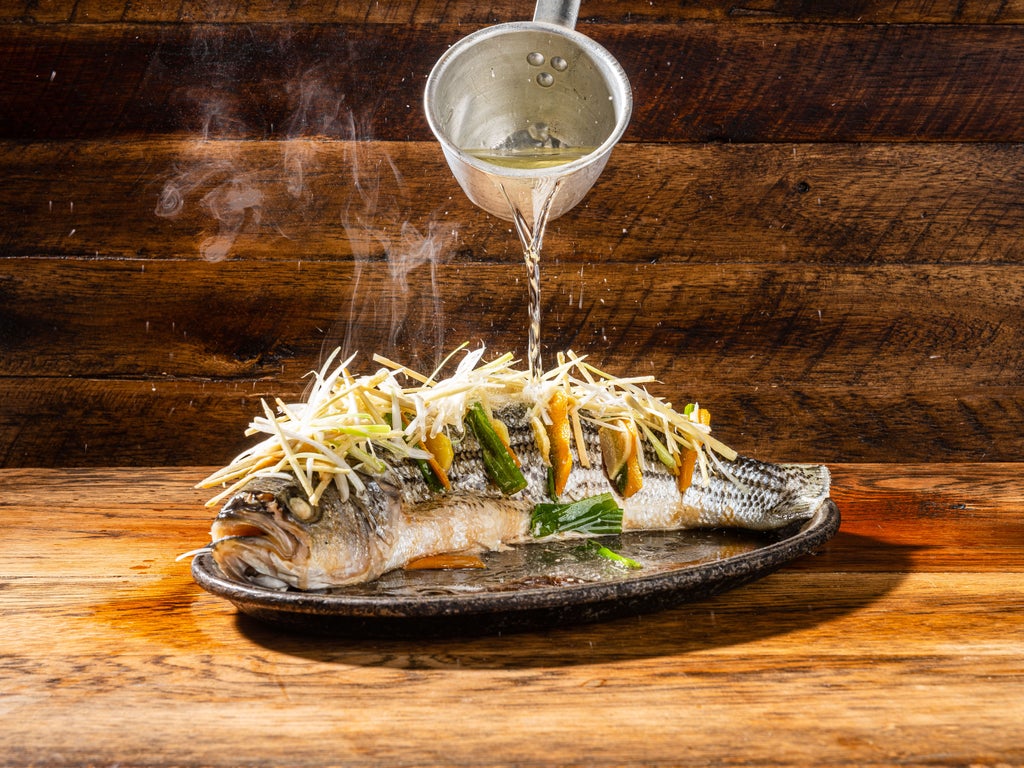 Like most kids, Brandon Jew had a favorite dish among his mother’s go-to recipes. Now the chef and co-owner of Mister Jiu’s in San Francisco’s Chinatown, Jew says his mum was an efficient cook who pulled inspiration from everywhere to get a meal on the table. “One night it would be some sort of casserole, another might be something like chicken a la king, the next night could be meatloaf, which my dad loved. But I always loved when she made sizzling fish,” he says.

Sizzling fish is a traditional Cantonese dish his mother, Mona Jew, grew up eating. Her family hails from Zhongshan, along the Pearl River Delta, where fresh seafood is plentiful.

When Jew started writing Mister Jiu’s in Chinatown: Recipes and Stories from the Birthplace of Chinese American Food with co-author Tienlon Ho, he knew he would include a recipe for his mother’s fish. “The smell, the taste of it always reminds me of being with her,” Jew says. Though he serves far more elaborate plates at Mister Jiu’s, including a fermented jook with lobster that takes days to make, and seasonal, jewel-coloured pot stickers, sizzling fish also is often on the menu.

“It’s such a simple thing,” he notes. “Looking back, I’m sure she made it when she was short on time and needed to make something fast for dinner.”

A whole fish for three or four people, seasoned with soy sauce, spring onions and ginger, takes less than 15 minutes to steam. Before serving, it gets a simple dressing of soy sauce and a light lashing of hot peanut oil – the namesake sizzle.

“The flavour of steamed fish in Cantonese cuisine is all about sīn thìm, the essential flavour of a fresh ingredient in combination with a pure, smooth sweetness,” Jew writes. In Cantonese cooking, the flavour of fresh fish is prized for its subtle sweetness. Steaming enhances that flavour and gives the flesh a succulent texture.

If you’ve never cooked a whole fish, this recipe is for you – especially if you’re comfortable roasting a whole chicken.

Besides being quick, buying and cooking a whole fish is less wasteful and more flavourful way to eat fish than defaulting to fillets (plus, you’ll always know how fresh the fish is by looking into its eyes, which should be clear and bright).

Whether you’re catching your own or buying one from a grocer or fishmonger, start with a gutted and descaled 450-900g fresh fish. If it’s closer to 900g, or you’re concerned about it fitting into your steamer, carefully cut off the fins with kitchen shears or slice the whole fish in half. The fish may need to be curled along the perimeter of the steamer to fit snugly. To promote even cooking whether you’re roasting or steaming a whole fish, cut shallow slits into both sides. Stuffing its belly and the slits with thinly sliced aromatics will gently flavour the fish as it cooks.

While the fish steams, practice your knife skills. After it’s steamed, sizzling fish is topped with thread-cut pieces of ginger and spring onions and then a splash of soy sauce.

The final flourish: a small amount of peanut oil is heated in a pan until it is smoking hot. When it’s drizzled over the thread-cut aromatics, everything will sizzle as the oil barely crisps the fish’s skin. The sound of the sizzle and smell of the sweet green onions and peppery ginger will let everyone know: dinner’s ready.

The method: For this recipe, a steamer is recommended, but if you don’t have one, a stainless steel colander fitted into a wok or wide pot works just as well. Lining the steamer or colander with cabbage leaves protects the fish, preventing direct steam from overcooking its tender flesh.

The main event: A round fish – such as bass, cod or tilapia – that can sit tall on its belly is ideal for this recipe, though a flat fish or fish fillets also can work. For a flat fish, lay it into the steamer on one side, which will cook slightly more than the side facing up. For fillets, lay them into the steamer with aromatics sprinkled on top; steam for 5 to 7 minutes, or until the fish is just barely opaque. If you don’t eat fish, boneless, skinless chicken breasts (steamed until a thermometer reaches 73C when inserted into the thickest part) or tofu, steamed just until warmed through, can fill in here.

The sauce: Any kind of soy sauce is fine, but premium or light soy sauce adds a gentler sweet-saltiness. The nutty flavour of unrefined peanut oil is nice here, but if you don’t have it, use vegetable oil instead. Don’t skimp on the soy sauce or oil, though, as it will form what Jew calls a “broken vinaigrette” on the plate with the fish’s juices.

The meal: You could steam thinly sliced carrots or chopped spinach alongside the fish, or serve it simply with a side of white rice.

Notes: To “thread cut” is to cut food into very fine, threadlike pieces. It is similar to the French julienne cut.

If you don’t have cabbage leaves, you can place the fish in a pie plate, and set that in the steamer. The goal is to shield the fish from direct steam.

Line a 30cm steamer or colander with cabbage leaves, if using, tearing them to fit, and set it inside a 35cm wok or large, lidded pot (see notes). Fill the pot with just enough water to reach the bottom rim of the steamer. Set the pot over medium heat and bring the water to a high simmer.

Run your fingers over the skin of the fish to check for lingering scales; remove them with the edge of a spoon. Starting about 2.5cm behind the gills, working toward the tail, and on both sides of the fish, make six to eight 5cm-long parallel slits into the flesh, not quite deep enough to hit bone.

Tuck some of the larger pieces of spring onion, ginger and/or citrus zest into each slit and slip the rest inside the cavity.

Place the fish in the steamer on its belly, if possible, making sure the water is at a high simmer. The fish can be curled around the perimeter or hang over the edges so long as everything fits in the pot. If not, carefully cut off the gills and fins and/or cut the fish in half to fit. Cover tightly, and resist the urge to lift the lid. Steam for 10 to 12 minutes, or until the eyeballs are opaque and the flesh of the fish is white and flaky at the thickest part near the head and first slit.

When the fish is ready, carefully transfer it to a serving platter (reassemble as a whole fish if you cut it in two). Drizzle with the soy sauce, then top with the thread-cut ginger and spring onion.

In a small, heavy-bottomed saucepan over high heat, heat the oil until it just starts to smoke. Immediately pour the oil over the aromatics and fish. The ginger and spring onions will sizzle. Garnish with the coriander.

Serve family-style, with a spoon big enough to capture a chunk of the fish with the juices that have collected on the plate, and with cooked rice and steamed vegetables on the side, if desired.

Adapted from ‘Mister Jiu’s in Chinatown: Recipes and Stories from the Birthplace of Chinese American Food’ by Brandon Jew and Tienlon Ho.

Nothing’s transparent headphones don’t do enough to inspire the next generation, even at low price