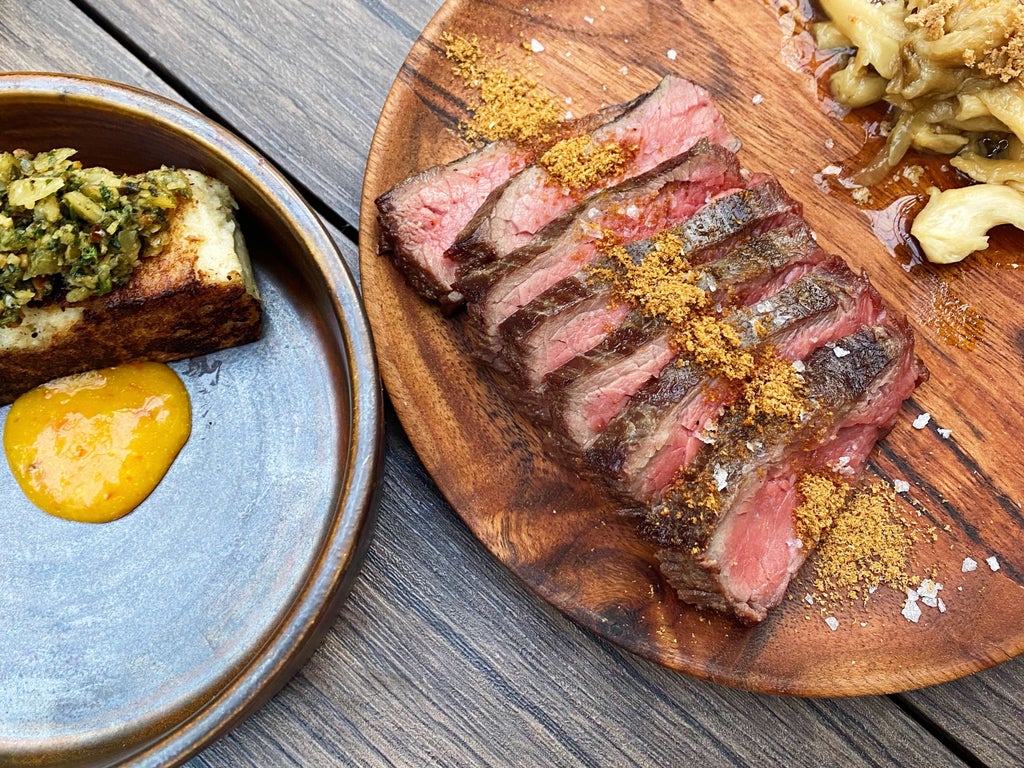 Chishuru is a restaurant with a story, one that is firmly centred around a talented chef and a passion for food, rather than glitzy restaurant stints and proximity to Michelin-starred kitchens. Head chef and owner Adejoké Bakare started out hosting supper clubs and dinner parties before winning a competition put on by the current owners of Brixton Market – the prize a permanent space in the market, the now-home of Chishuru.

Brixton Market itself is a complicated place. The ownership has a fraught relationship with the local population – their attempt to oust Nour Cash and Carry became a high profile fight with the community and London as a whole – and there is a lot to be said about the gentrification of an area that has provided a home and joyful space for minority groups that are increasingly priced out of their neighbourhoods. However, for now, Chishuru is a silver lining. The restaurant is a complete and utter joy, wonderful in its informality and serving up incredible food.

To dine at Chishuru is to eat well. The restaurant is a prime example of why it’s such a travesty that West African food has been overlooked for so long in the mainstream food world. It is, to put it simply, delicious. I won’t pretend to be an authority on West African cuisine; my knowledge of the ins and outs of ingredients, cooking methods and classic dishes is an ongoing journey. But you don’t need to be an expert to know that what you get at Chishuru is special.

There were a couple of things unavailable the day we visited, so we ordered one of everything that remained – a perk of dining with more than one companion. An incredibly tender piece of bavette steak was paired with pickled mushrooms and yaji, a fiery spice blend of chilli, garlic, ginger and onion. The acidity of the mushrooms paired perfectly with the depth of the meat, while the spice mix added a punchy heat. Ekuru – a sort of cake made from beans – is lightly fried and paired with a pumpkin seed pesto and scotch bonnet sauce. The ekuru itself was soft yet chewy, the perfect base for the pesto, with the scotch bonnet adding a tear-inducing kick. I always like to judge a restaurant by what I refer to as “snacky bits”, the kind of plate you could order on its own to accompany a drink. This is probably what I would opt for here – finger food in style and singing with a multitude of flavours.

Although, in saying that, there is strong competition for that title from the stock fish fritters. Golden, lightly fried balls of joy, they are a textural delight – crunchy on the outside, with a robustly textured inner thanks to the addition of cassava – with a citrus sauce that balances perfectly with the deep saltiness of the fish. The final starter was on par with the rest, but held its strength in its simplicity. Skin-on chicken thigh served with a black sesame sauce and pickled onions – crisp and juicy with an umami hit from the sauce balanced with the sweet and sour onions.

You can always judge a good meal by the noise levels that occur once the food comes out, and when our mains were set down we went silent, all of us too busy hoovering food or frantically piling it onto our plates to consider conversation. At many restaurants the side dishes can feel like an afterthought, sad plates of limp vegetables used to beef out your meal. At Chishuru, the side set could be a meal unto itself. Rice – usually jollof but on the day we visited, not – fried with spring onions and chives was dangerously good, with golden, caramelised slices of plantain making a strong case for the addition of sweet elements to savoury food. Best of all, however, is that it all paired beautifully with the selection of mains, intermingling with each plate rather than feeling surplus to requirement.

The dish of the meal, for me, was the goat ayamase. The pieces of meat literally fell apart as soon as you tried to cut into them, and the green pepper and onion sauce was the perfect partner – a slight element of heat and an unctuous depth from absorbing the flavours of the goat over a low and slow stewing period. The aubergine was glorious, served on a veritable bed of creamy peanut sauce (which I could happily eat with a spoon), it was slightly smokey and moreishly rich courtesy of the addition of shitto – a Ghanaian hot sauce – and truly pushing the boundaries of a vegetarian plate. The fish imoyo, meanwhile, was served in a tomato broth, the fleshy fillet almost melting into the sauce, ripe for the slurping. I recommend drowning a spoonful of rice in the broth, grabbing a piece of fish and messily gobbling it all up.

Last year Vice published an article analysing the diversity of the restaurants reviewed by national papers in the UK for the 12-month period ending January 2020. Finding that less than five black-owned establishments received a write up, the statistics were not just a damning indictment of restaurant journalism, but the wider industry as a whole. Articles written by Melissa Thompson in food newsletter Vittles and Riaz Phillips in Resy shone a light on how the problem runs far deeper than simply reviews. Just 6 per cent of Michelin-starred chefs in the UK are black or south Asian, and of that number, only two are black. The problem is insidious, and arises at all levels, right up to the lack of PR garnered from the distinct absence of reviews outlined in Vice.

So, when someone manages to break through this thoroughly gate-kept industry, it is something worth paying attention to. Not simply because Caribbean and African cuisines are a joy to behold, but because that person has had to fight five times harder to get to that point, often without the privilege and ingrained assistance that is automatically awarded to their white counterparts.

Whether you take cultural factors into account or not, Chishuru is a restaurant that should be high on your must-visit list. Bakare and her team draw you in, with their friendly yet familiar service and highly considered yet fundamentally simple dishes. Where many people’s local restaurant in London is likely to be an Italian or perhaps a Turkish, I am envious that for the residents of Brixton this could be theirs. What with Temaki across the way, and a whole host of new openings scheduled for the area, there has never been a better time to travel to the end of the Victoria Line.

Hell froze over? Apple Maps caught up to Google Maps with iOS 15. Top features to know

How you can benefit from Spotify promotion

How one can benefit from Spotify promotion