Could the rise of Y2K fashion trigger a return to size zero culture? 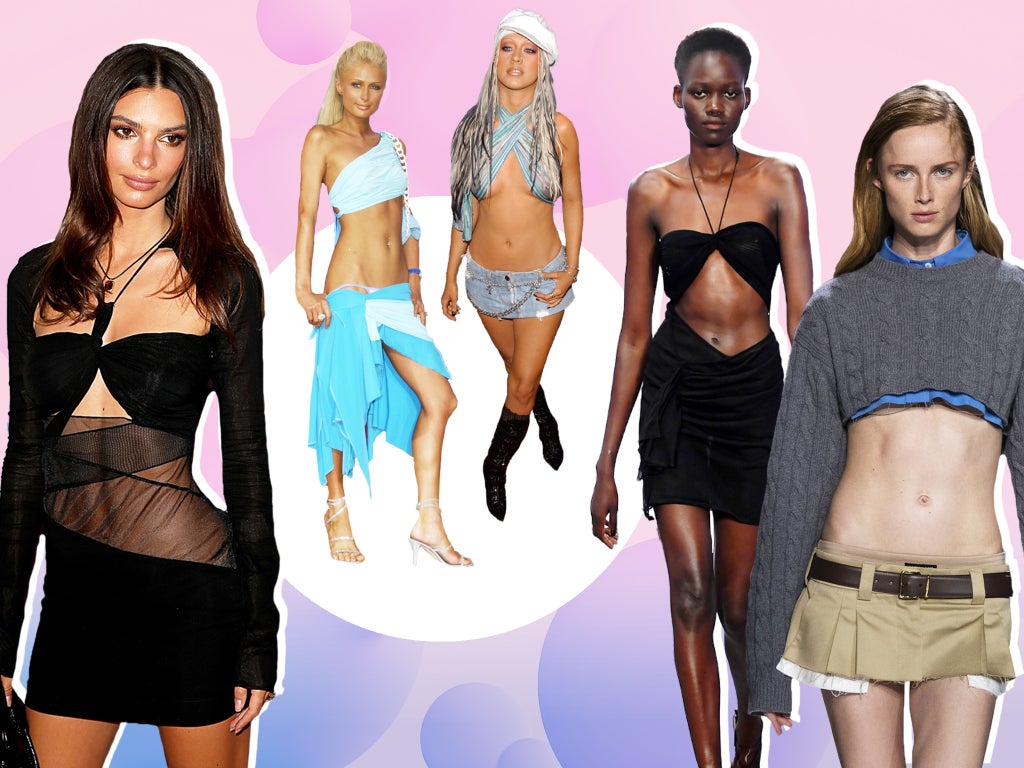 Of all the trends that dominated the catwalks during Fashion Month in September, there was one that stood out – namely because it wasn’t an item of clothing. Introducing skin, and it’s coming in hot for spring/summer 2022. Whether it was peeping out of keyhole dresses at Chloé and cut-out trousers at Balmain, or demanding attention through naked dresses at Rejina Pyo or in between crop tops and low-rise mini skirts at Miu Miu, skin was a ubiquitous presence in the new collections.

Of course, this emerging trend is about much more than a mere compulsion to flash some flesh. Its prevalence forms part of the rise of Y2K fashion, which refers to the period in the early Noughties, where It girls of the moment, like Paris Hilton, Christina Aguilera, and Lindsay Lohan, swanned around in low-slung flared jeans, mesh bodysuits, and figure-hugging corsets.

It’s an aesthetic that has made a triumphant comeback in recent months, spearheaded by a new era of It girls like Dua Lipa and Bella Hadid. Famed for their nostalgic ensembles, today’s cool-girl clan has a penchant for micro shades, double denim, exposed torsos, and many more key tropes from the early 2000s.

In London, the look was championed by cult labels, including KNWLS and Nensi Dojaka, whose popular mesh designs were even slinkier than normal. The LVMH Prize winner Dojaka debuted tights with cut-outs on thighs, tiny triangular bralets worn under blazers, and figure-hugging dresses with shoestring straps jaggedly crossing every part of the upper body where fabric would normally be. Meanwhile, over at Supriya Lele, the trousers were sheer and low-rise, while cutouts on hips and waists framed and exposed the female body. There was even an abolishment of underwear over at Mark Fast, where models strutted down the runway in jumpsuits complete with cutouts that went all the way down their sides.

So sought-after is this Noughties trend, that many of the looks that debuted on the spring/summer 2022 runways have already trickled down to the high street, with similar designs finding their way onto the likes of ASOS and Zara.

Evidently, the demand is high. According to global fashion shopping platform Lyst, searches for mini skirts are up by 76 per cent quarter-on-quarter, while low-rise jeans have surged by 91 per cent, and tube tops have risen by 79 per cent. “We’ve been tracking the rise of late-90s and Y2K retro-dressing for some time now as it’s been massive with youth cohorts buying up vintage pieces on Depop and Vinted,” says Emily Gordon-Smith, director of consumer product at trend forecasting company Stylus. “But for spring/summer 2022, designers have really embraced the era in various looks, including Clueless-inspired cutesy skirt suits, low-rise jeans and mini skirts, cropped tops, and baby tees.”

As for what’s fuelling the trend, many cite fashion’s seemingly endless love affair with all things Noughties and Nineties. “It’s particularly relevant for Gen Z consumers, who definitely have a nostalgia towards eras where the internet and social media algorithms did not rule fashion,” says Lorna Hall, director of fashion intelligence at trend forecasting company WGSN.

“But it’s also a direct response to lockdown, and that is definitely in the area where we are seeing the return of the outright sexy and skin on show when it comes to Y2K styling. This return to body-conscious dressing is part of a polarised reaction to being shut away from the world and living out life online.” This is an idea that taps into the “pandemic revenge dressing” trend that arose earlier this year as lockdown restrictions started lifting. Perhaps, then, we should have seen this coming.

Here’s the thing, though. There’s no denying that Noughties fashion is back in the sartorial zeitgeist, but few have acknowledged that its resurgence comes with some hefty cultural baggage. Yes, this was an era with many fashion highs that fit neatly into the 2021 trend circuit, but it was also the age of size zero and “heroine chic” – a time when hip bones and razor-sharp clavicles were the idealised bodily features. Almost all of the aforementioned It girls of the time, along with the likes of Mischa Barton and Keira Knightley, were also very slim. Body positivity did not exist. Instead, anyone above a size eight was viewed as some sort of social pariah, a narrative that was pushed in popular culture – see Shallow Hall, Bridget Jones and Friends – remember “fat Monica”?

And so what happens when we bring back the clothes that were en vogue at this time? Of course, anyone can wear a mini skirt, or a slinky Nensi Dojaka bodysuit. But is that really the message these brands are sending when their clothes are modelled exclusively on very slim models and celebrities? Or when they only go up to a standard size “large”, which, in most cases, is the equivalent of a UK 12-14?

“Sadly, ‘thigh gap’ discourse seems to be back on social media and this isn’t helped when images of skinny runway models in micro-minis and crop tops dominate coverage of the new season’s fashion collections,” says Gordon-Smith. “This trend does sadly exacerbate a very negative trend when it comes to body positivity and inclusivity.”

That said, a lot has changed since the early Noughties when it comes to how we consume fashion.

Thanks to the advent of social media, Gen-Z and millennial shoppers are increasingly taking their style cues from people just like them as opposed to fashion models and designers. “Fashion trends aren’t just set by the catwalks anymore and the world these looks are landing in, is much less in their thrall,” notes Hall. “One of the great things about diversity and inclusivity, as it’s being pioneered by Gen Z, is that there are a lot more looks for all sorts of body shapes, and a lot less exclusion around those looks in terms of who has the right to wear them.”

“The Y2K comeback has a component of reparation for the excesses of the 2000 decade,” says a spokesperson for Lyst. “In the same way some pop culture celebrities like Britney Spears or Paris Hilton are being reclaimed, Gen Z is embracing the Y2K fashion but with a size inclusivity mindset, pushing fashion towards more diversity and representation.”

There are also a handful of designers who are making waves when it comes to body diversity and inclusivity, like Maryam Nassir Zadeh, Collina Strada, and Chromat, all of whom championed what Vogue described as the “maximum midriff” trend on a wide-range of body shapes. And even though they are few and far between – there were hardly any plus-size bodies on the runways at London Fashion Week – they are there. And that’s much more than what can be said of the early 2000s.

“The body positivity and fat acceptance movements have made so much progress in the last 10 years that I find it hard to believe we will go back to embracing size zero culture,” says author and writer Stephanie Yeboah. “While we definitely have a long way to go, there have been major advancements when it comes to accepting bigger bodies and normalising them in our society. I’ve seen plenty of plus-size brands embracing Y2K trends and reinterpreting them for bigger bodies.” Yeboah cites the example of ASOS Curve, where she recently purchased a handkerchief top. “I never thought I’d be able to wear something like that as a child,” she says.

“Plus-size women didn’t have a voice at that time. We weren’t able to talk about how toxic that era was, which is one of the reasons why it continued. Now, we have the platforms to discuss these issues and hold brands to account. So I don’t think we will go back to embracing that problematic era, because as soon as a few of us start noticing anything like that, we all get online and start talking.”

Hopefully, then, though Y2K fashion is coming back, its return will be moderated by the current climate, one that will ensure we don’t revert back to the toxic culture that defined this period of time but can simply appreciate the clothes for what they were, and reinvent them in new and inclusive ways. It’s certainly happening on social media; perhaps it’s time for designers to catch up

How To show Your Statement Of Problem From Zero To Hero

How jumpsuit trends have changed over the decades