How to make the best potato salad of your life 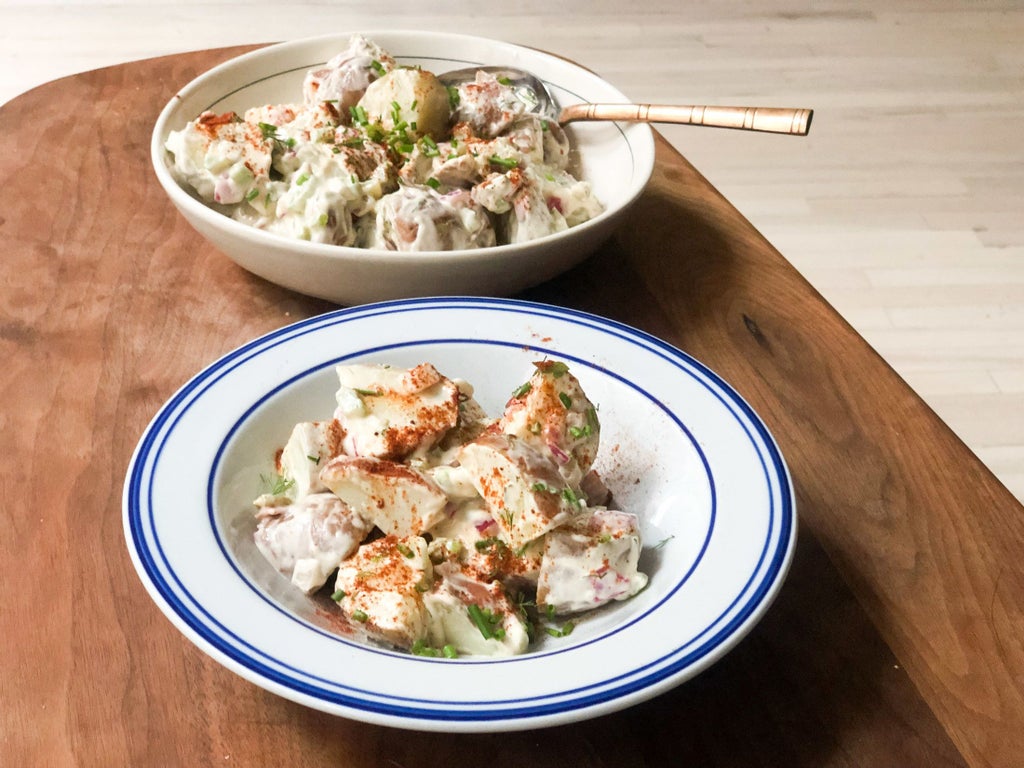 There’s always room for one more milk in the dairy-free case. The newest is potato milk, produced by Veg of Lund, a scientific research company in Sweden. Among its many attributes, potato milk doesn’t contain soy, gluten or added sugar, but does boast strong eco-cred: it uses 56 times less water than almond milk, and takes half the land to grow than required for oats. This week it became available in the UK in three flavours: Original, Unsweetened, and Barista.

Shenarri Freeman is ready for it. “Of course, I’ll try it at least once,” she says. “If I like it, I’ll serve it.”

Freeman is something of a potato expert. At Cadence, her postage-sized restaurant in Manhattan’s East Village, a vegan potato salad is a star of the menu. The most surprising thing of all to this omnivore writer: it’s the best I’ve ever tasted.

Cadence’s entire menu is vegan, which is no small feat considering that it’s also Southern, a cuisine not known for going light on meat and dairy products. It’s part of the plant-based empire established by Ravi DeRossi, a co-founder of the seminal bar Death and Co. The wine list at the restaurant also focuses exclusively on black-owned wineries, with labels from South Africa, France, and the US.

Freeman says the potato salad has become even more of a hit now that hot weather is here.

It’s based on her mother’s recipe. “She made it ever since I can remember. But of course, it wasn’t vegan.” In fact, Freeman’s mom Vernice made what can only be considered a fully loaded potato salad, embellished with deviled eggs. The chef adapted it when she became vegan a few years ago.

What makes Freeman’s salad so good is the texture and flavour of the potatoes that hold the dish together. She has a singular way of boiling them, adding a tablespoon of oil to the cooking water, which makes the potato bites taste richer. She also doesn’t cook the bigger potatoes whole; she prefers to cut them first, so they hold their shape.

Her best trick is to chill the potatoes before tossing them with a dead simple mix of mustardy vegan mayo, studded with pickles and crunchy red onion and celery. After being cooled down, the potatoes become creamy, yet firm, and are able to stand up better to the brightly flavoured, pungent dressing.

“Chilling helps the texture and set and evaporates some of the moisture,” says Freeman. “If you add dressing before they’re cool, they can get too soft. Then you’re stuck with mashed potato salad. I don’t know who wants that.”

The potato salad can, of course, accompany a burger, hot dog, or anything you would feature at a summer BBQ. For Freeman that means baked beans, collard greens, and barbecued jack fruit – a vegan feast.

Tester’s note: Small red potatoes are widely available, but you can also use new potatoes. The key is that they be small; if necessary, cut them into big, bite-sized pieces before cooking.

In a medium pot, cover the potatoes with water and add the oil. Bring to a boil, then lower the heat to medium and simmer until the potatoes are tender, about 15 minutes. Drain and let cool, then refrigerate until cold and firm.

In a big bowl, combine the celery, red onion, pickles, fresh dill, mayo, mustard and lemon juice. Season with salt. Add the potatoes and stir gently to coat. Check for seasoning; garnish with the paprika and chives and a little more dill; and serve.

Perseid meteor shower 2021 is heating up: How to watch the dazzling show

Meghan Markle could run for US president, biographer claims

Why Kenyan churches are banning politicians from pulpits

4 Ways You Can Grow Your Creativity Using Cheap Nfl…