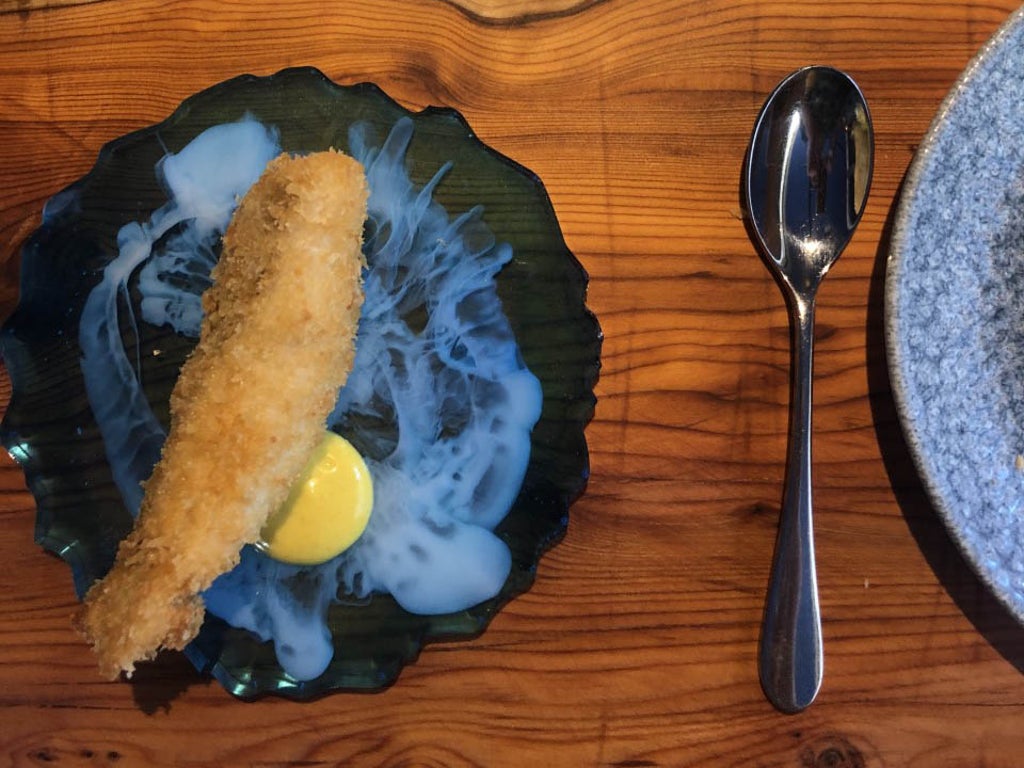 Have you ever been for dinner and the actual head chef greets you at the door? And then shows you to your table and chats. Then the same chef comes out of the kitchen to tell you what you’re eating and where it’s from? What about all of this while being barefoot, too? I thought so. Neither had I, until now.

Bruce Rennie at The Shore in Penzance is all of those things. And he’s the pot washer. He runs some of the dishes too, but that’s mostly done by the sole waiting staff member. The night solely relies on this double act. And they’re an impressive one at that.

His enthusiasm for the provenance of the food is second to none. Cooking with and involving the diner and ensuring ultimate freshness all round is his end goal. In doing so, he’s like a kid in a sweet shop standing at one end of the restaurant, hardly able to gasp a breath through his exactic explanations.

The night I went, in early June, was the team’s third night of reopening. But would you know that? Not at all. Service is slick, like a well oiled machine that’s not forgotten it’s job over the past year, despite barely opening.

The number of tables has been halved to just six; that night, it was all couples and one table of four. To make things easier, the menu is set, although it’s not a tasting menu, Bruce is quick to explain as you arrive: “Think of it more like some little tasty bits and then three courses.” This is, in fairness, a much better way of looking at it. Most of us are bored of tasting menus and have preconceived ideas about anything labelled as such. But here, Bruce has brought the concept up to date and added his own, very personal, twist.

The decor is muted, to say the least. There’s a faint nautical-cum-beach feeling from the dark blue, grey and white tones to the minimal art on the wall: a painting of an octopus and a sculpture of a school of fish. But we’re not here for the interiors. We’re here for the food, which sings.

There’s undeniable threads of Japanese influence throughout, from raw lobster and fermentation to miso, but it’s still whole-heartedly Cornish with an utter obsession with fresh ingredients. The gurnard is so fresh, Bruce tells us, that it didn’t even make it to market before he nabbed. Of course, it came at a higher cost, but it was worth it, he adds.

We start with “Bruce’s tasty buns”. He claims to be one of the early ones to sourdough, in an almost childlike way that’s more endearing than arrogant, but, like all of us, is now bored of it. So like all good innovators, he’s moved on. The result is little, perfectly formed and evenly browned buns; little creamy puffs of bread served with whipped butter – a dream. I greedily ask if there’s more butter, but Bruce only prepares what he needs – wise, I guess.

The raw lobster is the first time I’ve eaten it this way. Just before it’s served it’s cured with lime and chilli. It’s incredible and zingy. A classic Asian dressing still lets the flavours of the lobster shine through. The poached oyster is dressed with fermented kidney beans, an innovative way to serve the shellfish that’s a far cry from classic shallots or lemons. Bruce’s way is intense and smooth. Next up is that seriously fresh gurnard – which has been turned it into, essentially, a posh fish finger. I was slightly surprised at his choice to batter something that’s only just left the sea, but it’s ever so light with a dot of curried mayonnaise. A simple, but genius, take, bringing the “little bites” section of the menu to an end. Already, I could eat them all again.

Next, the Cornish king crab is served two ways: firstly as a lightly spiced broth,secondly in the shell as a salad with spring vegetables. Both worthy, thought I preferred the salad for its lightness.

Those who hate the small plate way would be pleased with the hake, the meatiest of all the dishes, which felt like a main course. The generous hunk of white meat flaked apart, pooled in a buttery miso-infused sauce, with rock samphire, potatoes and courgette. It’s utterly salty, yet summery and satisfying.

Away from the salt, comes sweetness in the form of a strawberry tart with vanilla cream and basil sorbet. Were it not for the basil sorbet, though, it might feel a little less impressive than the rest of the menu.

There’s a suggested wine flight, but the wine list alone is so up my street and full of fruity and fresh whites – clearly chosen to bring out the best of the fish – that I do my own wine flight of little glasses, choosing a French Picpoul de Pinet, a Hungarian Furmint and an Australian Viognier. Each was as expected, bold and punchy, and paired well. You never know what you’re missing, but I was pleased with my selection.

The set menu is £69 per person – the optional wine flight is £45, or four or five small glasses (as I chose) is around £30. Before going to the restaurant, you pay in full for the food, which should be more regularly insisted upon and more widely accepted by diners, too. If someone fails to turn up, the produce isn’t used and likely goes to waste. It’s not a profitable way to run a business.

As Bruce washes all the dishes himself, nothing is too lowly for him. He’s grounded, but still dreams big with flavour combinations, cooking styles and presentation, while all at the core is locality and freshness. He thinks he’ll keep the bookings to the size they currently are, which again points to his absolute infatuation with what he does – providing incredible quality food to guests, which clearly matters far more than profit. That is no only rather unheard of, but quite admirable too.

For Bruce, in his own words, it’s about bare feet, keeping a clear head and spreading love. And who can argue with that attitude?

Why Kenyan churches are banning politicians from pulpits

4 Ways You Can Grow Your Creativity Using Cheap Nfl…